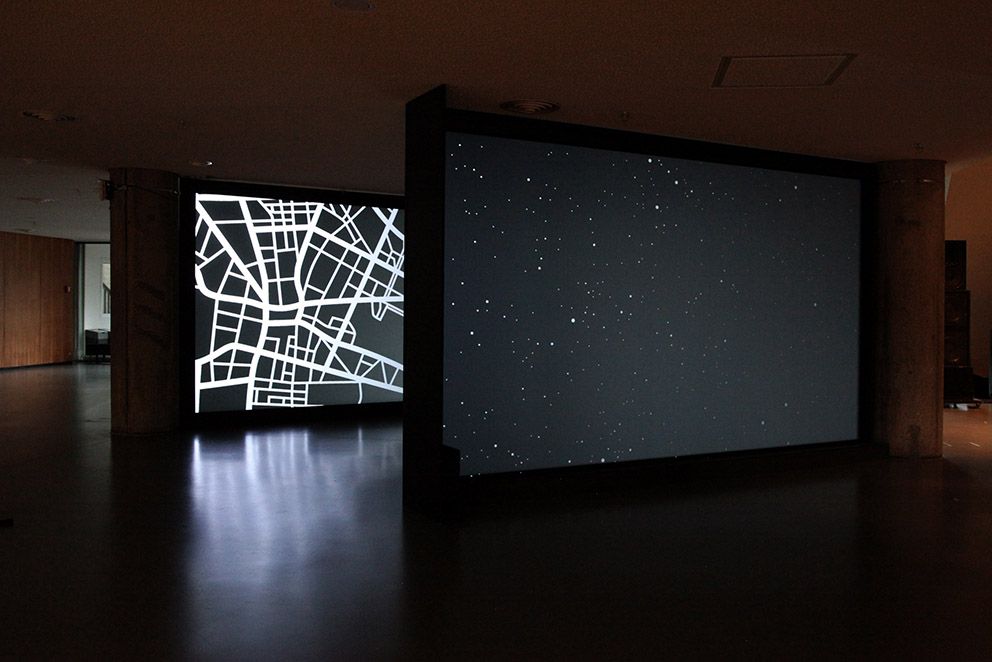 Notes on the representation of time and space

“Along with language, writing has thus become an archive of non-sensuous similarities or non-sensuous correspondences.” Walter Benjamin, p.111 [1]

“The star is always a kind of ruin. That its light is never identical to itself, is never revealed as such, means that it is always inhabited by a certain distance or darkness.” Eduardo Cadava, p. 30 [2]

Space determines the context where things take place, influencing the facts. At the same time, the facts can alter the space where they happen in a connection of mutual affection. Likewise, there is always a specific moment when things occur: time is a constant vector in every action, deed, or historical fact. How could time and space be visualized?

We can see a starry sky as a time marker: stars’ position in space allows the construction of specific moments in time. When looking at a starry sky, we are looking at a time chart. The time we see through the configuration of the stars in the sky is an abstraction: what we see is a partial image of a universe, which, in reality, is formed by traces of light from stars in movement.

Nonetheless, a starry sky shows us a specific moment in time and a specific position in space, making it possible to situate the geographical point and moment of our looking (where and when).

By tracing connections between the physical space of the city and that of the universe, what we perceive is determined by the reduced virtual space of a graphic representation, where the local dimension is brought closer to global space.

The map of the city

To look at the structure of a city, you need distance: once inside the city, an understanding of its structure is lost. On a map, one can see all those layers formed on a surface reduced to a collection of lines—as if all the temporal and spatial dimensions have been projected onto a single surface, forming a flat image based on a complex organism.

A city map is a kind of plan view of fragments, different stories, and sedimentations of time occurring in space. Rather than a linear narrative, it is a transformation of a complex topography into the two-dimensional form of a drawing. There are no cities in a map drawing: there is a representation of urban space in which only one of the many layers can be seen.

Thinking with the stars

A map of the stars is a charting of the position of various celestial bodies in the universe. It is also a map that records disappearances: each spot of light indicates a past moment that reaches our eyes after some delay and with the simplified appearance of a bright spot in the sky.

To consider [3] that the stars indicate a specific moment in time is to think about stars in their temporal dimension. A map of constellations is a map of time.

If every star is a kind of ruin of its existence, we are witnesses to these vestiges shining through time and the darkness of the universe.

Maps of cities are formed of constructions, destructions, appearances, and reconstructions. Star maps indicate the position of celestial bodies from our visible perspective. The nature of these two types of maps is quite different: the lines on the map of a city can be followed; that is to say, it is possible to get lost in those streets that we see as lines; the spots that mark the position of stars indicate specific moments in time, despite being registers of disappearances more than anything. Physical space reveals layers of past time, but it does so by shaping the evidence according to layers of those overlapping times that transform space. The dimension of time is more abstract for human perception: we attempt to grasp the temporal dimension through its relationship with space, through our circulation and presence in places (nonetheless, the temporal dimension is greater than the measure of life).

Looking to the sky

Looking at the constellations and using them to read time positions us as one point in the universe. Our position forms a triangulation with the visible universe: so we exist in relation to that image of the universe. But the universe does not depend on our gaze. What we are looking at is a fragmented charting of past time.

How can time be visualized?

Over the course of a century, it is possible to witness the constant transformations of a starry sky: by observing the movements of light spots, evidence of the passing of time. Stars represent [4] the past and the present. The drawing of constellations as a map is the writing down of time.

The star map can be a way of visualizing the temporal dimension as a drawing in space. Like the letters of the alphabet, the dots and lines on a flat surface demonstrate the basic principles of graphic representation.

In the video installation Mikrokosmos, the drawing of constellations can be seen in slow circular movements across eighteen sky maps over Berlin (each map represents one day of the year, throughout the twenty-first century, until the moment when the video is shown). These star maps can be seen on one screen arranged in front of another, which shows the map of Berlin. [5] One part of the city map can be seen at each moment as a kind of fragmented record of the space in which we live.

The representations of space and time are abstractions that create another reality that is neither spatial nor temporal—although it exists in time and space. In the video installation, the virtual nature of the relationship established between the two representations suggests a kind of metaphor for our actual position: we live in the space between city and sky, between urban map and map of the constellations, where perceptions of time and space are mutually formed and transformed.

[3] The etymology of the word “consider” suggests a way of thinking with the stars (con + sider – sidus [with + heavenly body]: considerare (Latin) or considerer (French)).

[4] “To represent a star, then, […] is to bring to the light of history what, not waiting for the day, cannot be brought to light. This is why the reading of stars involves the destruction of stars.” Cadava, Words of Light. 30.