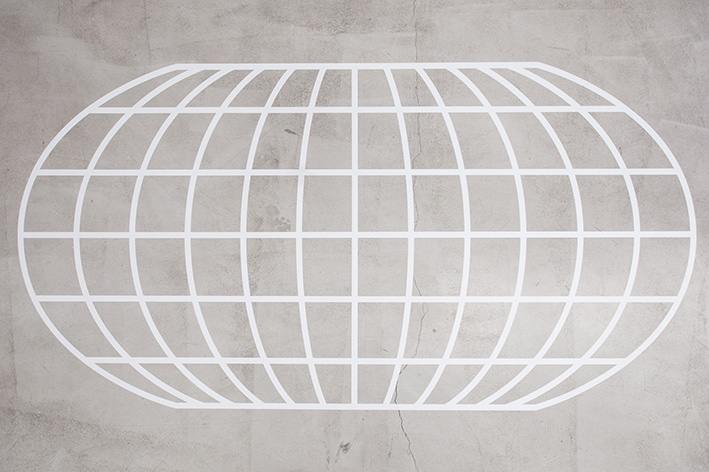 In Planisfério (Planisphere), Marina Camargo’s work orbits between its two main artistic thrusts: the attempt to encompass something of amplitude and the more detailed focus on the specific and the indicatory. At the crossings between landscape and confinement, the intuitive and the conventional, the diluted and the determined, the Porto Alegre-based artist uses drawing as the springboard for her works. Camargo, however, has visual supports in the lines, outline, and other atomic elements of such language. The thinking in the drawing is the essential ingredient, something prior to the results exhibited in galleries.

“[…] I make reference to a broader notion of drawing related to the formation of a visual thought. […] I believe that drawing has the power not only to expand as a field but also to be understood as a malleable, permeable, porous field. […] For me drawing is very close to the field of ideas, of forming ideas and perceiving the world […]”1, she remarks. Inventory of Waters – Rivers (study for a Brazilian Atlas), 2012

In the Zip’Up room, therefore, the artist’s proposition can be seen as an installation space, rooted in the idea of a drawing that pulls away from the plane, formed by the interventions from 2012 Projeção I and Projeção II and Inventário de Águas – Lagos/Lagoas (Inventory of Waters – Lakes/Lagoons) and Inventário de Águas – Rios (Inventory of Waters – Rivers). The first set uses the contours of a world map seen on two walls of the room. As if the projections were unfolding in adhesive vinyl on the floor, such planispheres are marked by latitudes and longitudes, absent in the wall representation. The second set meanwhile makes use of architectural templates – cut out in usually blue-coloured, translucent acrylic – to record the principal river basin and lakes/lagoons in Brazil. Through the four sheets of overlapping acrylic, the compositions make use of the cutout spaces, playing with the colours and transparency and the fragile materiality to create a cartography that tangibly ceases to provide any precise reproduction of that which originally gave rise to their creation. In Projeção I and Projeção II, the same procedure is adopted: the representations of the globe function now as windows (on the walls), now as projections or virtual places of edges and boundaries stripped of their primary function (on the floor). This re-presentation of systems made by Camargo ends up scrambling the most incisive, regular and surefire notions that surround us. If maps – now, through mobile devices, more omnipresent and everyday than ever – are human constructions also created to facilitate understanding of the surrounding area and with structural frameworks that are currently compromised – due to scientific postulations now seen as dubious and political doctrines in rapid decline, for example – what does the artist actually want to discuss? “Where a representation of the world fails and cannot cope with reality, but indicates something of it, even if piecemeal, drawings stem from precise references, but perform no function at all”, she states. Projection I and II

Therefore, uncertainties, incompleteness and flaws revealed in the gaps of a hegemonic argument – “Could there be cartographies that are not at the service of the domination?”2, asks the Colombian curator José Roca in a text for Ensaios de Geopoética, the 8th Mercosur Biennial, held in 2011 and featuring Camargo – are perceived through the construction of a strong artistic process, even when the resulting displacements and decantations may seem, a priori, very precise.

Camargo’s work, therefore, is more connected to the erosive, continually transmuting character of concepts conveyed and defended by, to name but one, Smithson, in this one of the new central avenues of contemporary art. Like the artist’s previous works, Planisfério is founded on a precarious and finite design, bringing an unstable existence to the fore. The dissolution of lines and volumes of Geografias (2011), the open aspect of Open Horizons Project (2010), the references that float and fade from Atlas do Céu Azul (2010) and the weak light of Some Air in Between (2011) are intimately linked to the present exhibit and, bit by bit, add robustness to one of the most interesting recent productions of Brazilian contemporary art.

Mario Gioia is a graduate from the ECA-USP (São Paulo University School of Arts and Communication), was a reporter and editor on arts and architecture for the Ilustrada section of the Folha de São Paulo newspaper from 2005 to 2009 and currently contributes to various publications, including the magazine Bravo and the UOL online portal, as well as the Spanish magazine Dardo and Italian Interni. He is the coauthor of Roberto Mícoli (Bei Editora) and a member of the Paço das Artes critics group.