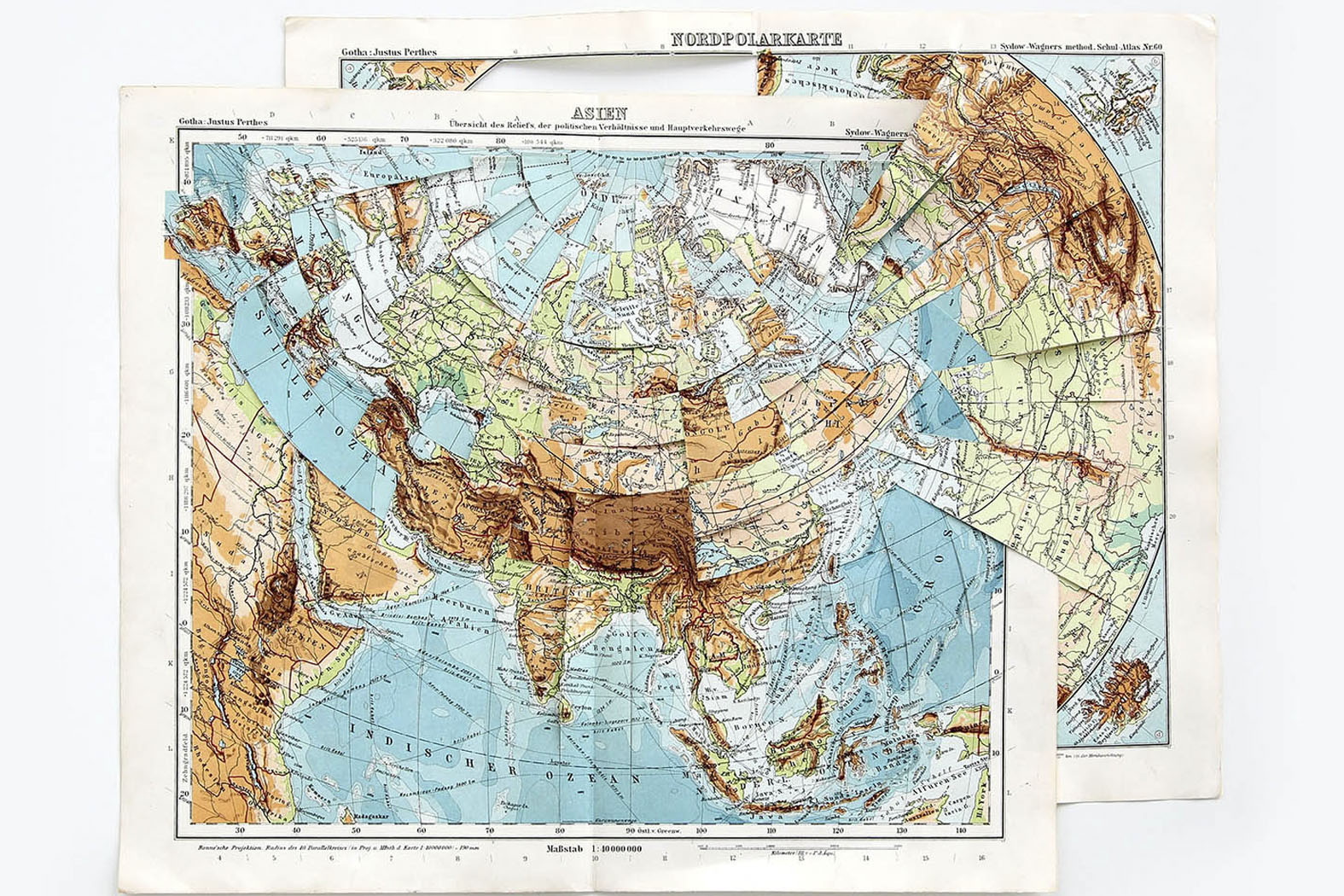 Maps of space and time

European landscapes were common features of puzzles, wallpaper and home decoration in the 1970s and 80s. I recall a seafront restaurant I used to go to in my home town of Maceió, in which one entire wall was covered with an image of landscape.

In those days I was a child who lived on a tropical beach, and I was captivated by that image of a mountainous landscape. The landscape was typically European (which I didn’t know at the time) but I well understood that it was indeed a landscape worthy of being printed on wallpaper. There is an implication that some landscapes are prototypical. And there was also a kind of implied overvaluing of that landscape, typical of a colonised country. I might add today that there would be no point in using wallpaper depicting the Caribbean, for example, if the other side of the street gave on to a similar landscape. In other words, the image of that autumnal European landscape in that context was the most exotic that we could admire.

I recently discovered that the key thing about this memory is the fact that there is indeed a representation of landscape which would be a kind of reference for representing all landscapes. The Alpine mountain landscape is one such representation. It is so well known, so widely reproduced around the world that it contains the actual idea of landscape itself, and also represents a series of cultural symbols.

There between the wallpaper landscape and the tropical beach across the street were two ways of relating oneself to places: through representation or through presence, two different ways of being-in-the-world.
What emerges between those two places is a feeling of displacement that will be a striking feature of my life and work. That hitherto fictitious image of European landscape seems like some harbinger of where I would live. And that beach becomes the beach to which I always return, where I will return always, my guiding horizon.

A mountain on the border

Years later, when I went to study in Munich, I rediscovered that landscape I’d seen in countless reproductions (such as postcards, wallpaper, etc.). While my own references originally related to a straight horizon line drawn where the sea meets the sky, the Alps took me to another world.

When we look at Alpine mountains, we are looking at various dimensions of landscape. The Alps are an iconic landscape in terms of nationalistic identities or ideas (it was an emblematic landscape for German Romanticism, and later adopted by the Nazis as an image of the nation). There are so many layers of history and cultural references that we get the impression we already know a place which we have never visited.

But there is also a geological formation to these mountains that reveals other dimensions of space and time. Mountains are formed in various ways (1). In the case of the Alps they are formed by a fold in the land resulting from the collision of tectonic plates. This collision led to deep parts of an ocean ending up forming a mountain peak, or the earth of one continent ending up by forming a mountain on another continent.

Looking at one specific example, the Matterhorn is an iconic mountain of European landscape, situated in the middle of the European continent. This mountain is traversed by the border between Switzerland and Italy. Political boundaries already seem to be abstractions, a kind of geometry imposed over places. In the case of the Matterhorn, this boundary passes over one of the highest and best known peaks of the Alps.

On the one hand this mountain represents a typically European landscape, while on the other this landscape reveals the meeting between distant continents: The Matterhorn is a mountain formed of rocks and sediment from the African continent.

A series of questions arises out of these observations: whom would a land ultimately belong to? How can one say that someone belongs to a particular place? What defines belonging to a place? Contrary to the idea of tradition, how might a land belong to a people? How can one understand the relevance of political boundaries?

When we are in front of a mountain we are witnessing a slow movement of tectonic plates. Time here is of the order of thousands of years, to the extent that we cannot really notice any movement, unless we look at the traces the movement has left behind.

Apart from what is immediately visible in a landscape, there is a fluidity that moves the organisation of the Earth. That fluid comes from inside the Earth, from the depths of the planet, and comes to the surface through slow and brutal thrusts which form mountains as the result of earthquakes and volcanoes. Everything is fluid. This fluidity puts the tectonic plates in constant motion – therefore continuously altering the structures of the Earth and also, as a consequence, the landscape.

[1] In general terms, mountains can be said to be formed in three ways: one would be through volcanic eruption when the magma (which is in fact liquid rock) flows out from inside the Earth; another would be through erosion (such as by the wind or a river causing the earth to erode from higher areas, thus forming mountains); another way would be through the movement of tectonic plates, causing a fold in the land by pushing the Earth’s crust against itself. There are also mountains that are formed artificially, such as those built widely in post-war Germany to cover and reorganise rubble and ruins in urban areas.

How maps are born

The drawing of a map requires that the world be systematised. That is a principle of representation. Then a process of interpretation begins: the earthly globe is flattened, converted into two dimensions. Geographical north is conventionally represented at the top of the page/map (as Mercator did, based on maritime charts).

There are also other practical issues: entire regions can be enlarged or reduced in this process of transformation, according to the specific interests of the mapmaker. But while we think of maps as representations of the world, we can also accept the idea that there is not a little invention in this process, knowing that there will inevitably be some distance between what maps are and what they represent; between the drawing of a specific place and the place represented.

Nonetheless, maps are considered to provide objective information about the world and are therefore read as absolute truth. Although maps are based on a collection of objective data from reality, they also contain implicit views of the world.

Maps become instruments of debate, therefore, and are also governed or influenced by political, economic or historical issues, by national interests and also by records of domination and the historical period that they represent. So we can also consider maps as non-linear narrative constructs, narratives told through spatial topographies.

When we consider the movement of tectonic plates, they inevitably relate back to an original time when the earth consisted of one single continent. This single, unique, united, utopian territory would have preceded the period of fragmentation and movement that formed the Earth as we know it today.

Pangaea relates to the idea of an original unity, a unified whole that becomes separated and fragmented. This story contains a notion of completeness that is interrupted by the inevitable fragmentation of the geological development of the Earth.

The idea that we do not occupy a complete, totalised place makes us witnesses to territories that are shifting, metamorphic and totally fragmented – just as our world views are.

What if our structures for representation and understanding the world were fluid? Why can’t we imagine other ways of representing the Earth?

The distance between things

That same distance reveals much about the nature of cartography. When we look at a map we are faced with a graphical reduction of places. Some elements of the landscape are present (such as roads, mountains and valleys) but other non-visible elements might also be present (socioeconomic data, ocean depths, volcanic structures, etc.). Regardless of their nature or function, maps retain a direct relation with the real world, and also a distance in relation to it. Distance or a direct relation with world things are both necessary requirements for the existence of a map.

I see mountains as a kind of puzzle or enigma. Their physical presence reveals various layers of the formation of the landscape, as folds in the land. Mountains embody a mark of time which is ungraspable (or not directly recognisable) by our human existence. Layers of time are mixed with physical layering, generating a relationship between space and time that still escapes our understanding.

In an essentially different way we can also see a starry sky as a marker of time. The position of stars in space allows construction of specific moments of time. When looking at a starry sky we are looking at a kind of time chart.
The time we see through the configuration of the stars in the sky is obviously an abstraction: what we see is a partial image of a universe (the universe visible from our viewpoint on Earth), which is in reality formed by traces of light from stars in movement. In other words, the time that we can “read” through space is not just partial but also essentially distorted.
Nonetheless, a starry sky shows us a specific moment of time and a specific position in space, making it possible to situate the geographical point and moment in time of our looking (where and when).

Looking at a starry sky, it can be seen practically as a flattened map, since what we are seeing from our place are luminous dots amidst the dark immensity of the night sky.

Ultimately, what we are looking at are just traces. Starlight is like traces indicating moments of time. Geological folds show us fragments of a space in movement. Shifting continents reveal other possible structures for cartography. Fluid structures replacing rectangular structures appear as a way of expanding the cartography and representation of spaces and time.

Translated into English by Nick Rands

The pampas and the sea (travel notes)